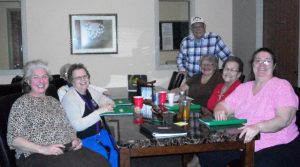 The need for meaningful human connection and belonging is both physiological and psychological. Loneliness is a distressing feeling and a chronic subjective experience but is not the same as being alone.  At Good Shepherd Community social events are offered but we have found that simply placing residents together in an activity does not always reduce loneliness nor promotes a sense of belonging. The lack of a sense of connection and belonging to a community has been linked to both loneliness and depression.

Java Music Club is a research-based mutual support activity group program designed to combat loneliness and depression. The focus is on having group participants help each other with the basic altruistic concept that people are happiest when they are helping one another.  Research has shown that having a variety of components in one program (themes, photography, music, readings and the talking stick), makes for a highly interactive and successful group.

“I have never seen such a turnaround in people who have attended.  I love the confidence that it is building in those that are attending.  You can actually see their growth happening,” says Barbara, Service Coordinator.

One example of the program’s success can be seen in the changes brought out in resident Kate.  In the past, Kate would say only “hello” with a smile to others.   During the meeting, when it was Kate’s turn to holding the talking stick, she was about to pass it along.   However, after a few good questions from resident Shelly, Kate became animated going on and on about her family and really enjoyed herself.

Residents have many good things to say.  Julie shares, “Friendship is key factor and communication with people.”  Gladys states “Power of doing!   I love this program, it makes me happy.” Resident Sharon adds, “I like the excitement of people coming together and relating to each other.  It was not like this before.”

Longtime community volunteer, Eugene explains “Java Music Club pulls people together first as neighbors and now we have become friends.  It pulls out our personalities and creates new interest in all who attend.  It gives people a chance to ring their chimes.” 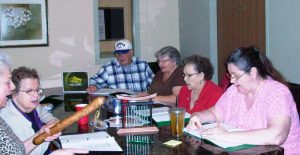