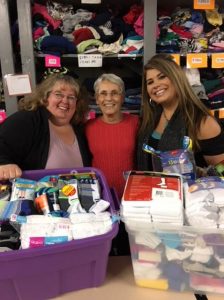 During the month of October, Messiah Community and Luther Community partnered together for Socktober. The goal was to see which building could collect the most socks for the Caring Kitchen Homeless Shelter in Urbana, Ohio.  It was an extremely close race until the very end with Messiah collecting 233 pairs of socks and Luther collecting 226 pairs with a total of 459 pairs of socks of all shapes, colors and sizes.  Residents from both buildings were thrilled to be involved!

The history of Socktober:

In October 2011, creator Brad Montague realized there was a large homeless population in his hometown, and he wanted to do something about it. While researching the needs of the homeless community, he learned that socks are the items least donated to homeless shelters. So Brad took action. He began to film himself wishing people “Happy Socktober!” as he gave out pairs of socks on the streets, and he posted these videos on social media.

Word got around about these videos, and people wanted to know how they could help. So in a stroke of genius, Brad created a Socktober rap that could be purchased for a $5 donation to The Van, a group that drives a van around Arkansas to deliver necessities, including socks, to those in need.

Since then, Socktober has exploded! Kids and adults around the world have started their own sock drives to benefit their local homeless shelters. In 2013, Socktober teamed up with Kid President to spread the word and encourage more people to participate. Last year, participants on all seven continents donated pairs of socks!